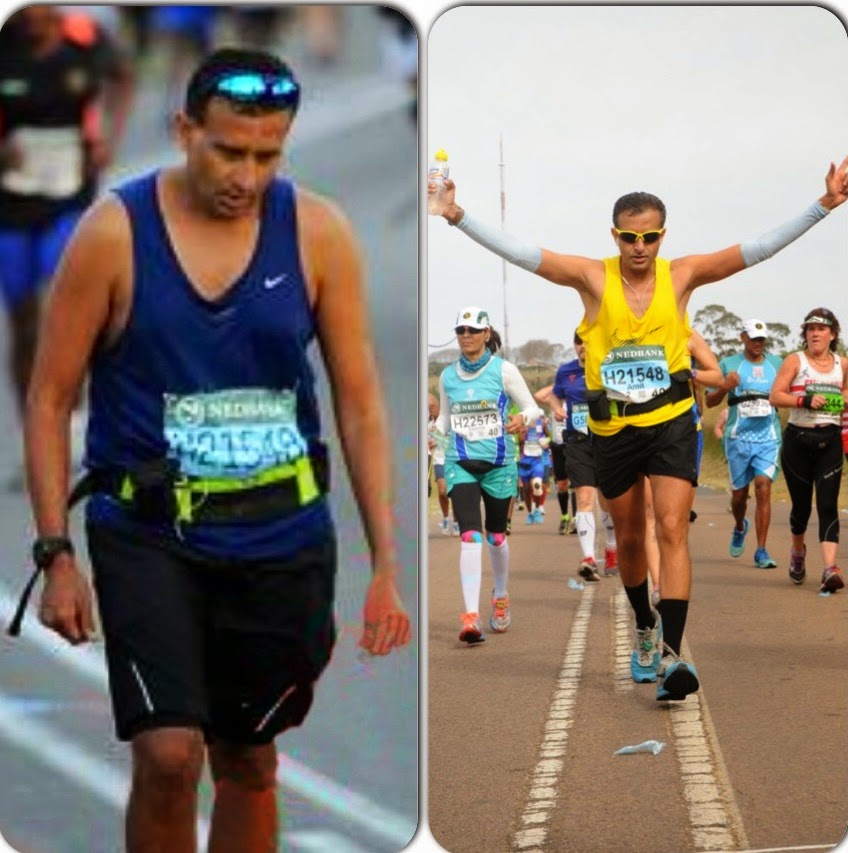 The wise have always spoken about the difference between knowledge and wisdom.  I have often personally experienced that knowledge without wisdom is dangerous.  The enlightened masters try and share their wisdom but things often get lost in translation.  Communication is difficult business especially when it is between people.

As a passionate recreational athlete, I have tried to follow the words of all the great runners and athletes and come to realize that I often, totally misunderstand what they are trying to say.  Sometimes I don’t understand their point at all, and sometimes, and this is worse, I understand only half.

My understanding or rather misunderstanding of this phrase, started with a fictional character.  It started with the Rocky movies. The first movie was released in 1976. I was just 10 years old then and I went to see it along with my Dad. I still vividly remember the awesome experience.  The 6th Rocky movie was released in 2006.  I own all the DVD’s and I know every scene from every movie.

In almost all the movies, there would be a fight when Rocky would be down and out inside the ring, his face would be beaten to pulp, his eyes would be swollen up and his nose broken.  There would be blood all over the place.  After a massive blow from his opponent, Rocky would fall down and the commentator would shout, “And Balboa is down!!”

Then the music would start and we would get transported inside his mind. A slightly disoriented Rocky would visualize his coach shouting encouragements at him, his wife pleading him to get up, he would visualize his son, he would visualize fragments from his other fights, and all the time the beat of the music would be rising to a crescendo and then a voice-over would speak some kick-ass lines:  “Life isn’t about how hard you hit.  It’s about how hard you can get hit and keep moving forward.  How much you can take and keep moving forward.  That’s how winning is done!”

By now, the music would have reached such a crescendo that I would have stopped eating my popcorn or sipping my coke. I now wanted to jump out of the seat and jump into the ring myself.

He would then get up, in slow motion, and within minutes beat the other guy to pulp.

My conclusion on watching this: “It’s all in the mind.”

As I grew up I started to believe that some miracle happens when a champion is down and is in need of inspiration.  I started to believe that the champions have a special corner in their mind into which they can dip whenever they are in need of a reboot.  They simply dig deep and are able to pull-off miraculous recoveries at their own whim.  I came to believe that they have a superior mind which triumphs over adversity, a mind that triumphs over the weaknesses of their mortal bodies. That they are made of sterner awesome stuff!

I came to believe that by purely the power of their mind, they can overcome all hurdles.

I have often tried to do a Rocky.

Standing on that Comrades route, buggered beyond reasonable limits, with salt having leached out of my body and onto my skin, with my stomach sick and full of a concoction of GU, Energade, Cola and being ready to vomit at a moment’s notice, I have searched inside myself and my mind for that elusive strength. I have searched for that mind which can prevail over my weak matter.

After a few such experiences I concluded that either my mind was not strong enough, or that I have misunderstood the phrase, “mind over matter”.

Osho often used to say, “I am responsible only for what I say, and not for what you understand.” And I have come to the conclusion that I had understood only half of what the phrase meant.

Comrades 2014 finally made me see the light or at least the halo of a light.  I might have still not fully grasped the concept but I do now know that my original understanding was wrong and that in-itself is great progress.

For the 2014 Comrades, I followed a training schedule given to me by my friend Celi.  Celi dramatically altered my training routine.  I used to run about 1000km between Jan and May.  Celi made me run 1600km.  He made me do far more speed and hill training than I would have ever done on my own.  It was hard to push so much, but having experienced agony and tragedy on that Comrades road a few times, I was determined to do whatever it took to enjoy a safe finish.

Celi gave me only one piece of advice besides my training schedule.  His advice was simple and elegant and scary.

For every repeat he wanted me to hold nothing back and to give it all I had. “Kill Yourself”*, he wrote.

Every time when I ran my repeats and felt myself slowing down, I asked myself the question, “Am I killing myself?” and the answer was invariably “No” and suddenly the legs would move again, faster and faster !

What he wanted me to do during my training runs was to get into a zone of discomfort.  He wanted to get me to experience the pain of race day, again and again in training, although only in small doses. And so I pushed through pain and did in training what I hoped to do on race day.

And finally on Comrades day 2014, whenever I felt a bit tired, it was easy to look back with confidence at what I had endured in training.  I would again ask my mind, “Are you killing yourself?” and the answer was always a “No” and then I knew that I could keep moving forward towards the finish line.

I had realized that it cannot be “mind over matter” in a crisis unless you have trained the mind when not in a crisis.  It is only when the mind has experienced in training that which is coming on race day, can you be prepared.

I have learnt that there cannot be a magic day unless I have done in training what I want to do on race day.  This does not mean that if I want to run a marathon in 4:30 that I have to run a 42k in training in 4:30 but it does mean that I do some decent amount of distances on race-day pace in training and some shorter distances faster than race-day pace in training.  The whole combination of training has to be perfect: long runs, recovery runs, speed intervals, hill intervals and fartlek runs.  Unless everything is done right, there won't be any race day magic!

In my non-scientific, purely personal, and non-professional opinion, I have come to the conclusion that the human mind is programmed to shut down the body whenever it fears that the body will irreversibly hurt itself.  The only way to push the body beyond its normal comfort zone is to convince the mind that the body will not perish and the only way to convince the mind is to take it into that zone in small doses in training.  So later, on race day, the mind recognizes the zone and allows the body to keep moving.

Looking back, I realize that Muhammad Ali, (a real-life hero as opposed to a fictional Rocky) had articulated the message perfectly well quite a long time ago but I had failed to understand it.

Ali said that, “The fight is won or lost far away from witnesses- behind the lines, in the gym, and out there on the road, long before I dance under those lights.”

Finally I have understood what Ali meant. There is no sudden magic, the phoenix does not rise by some miraculous energy brought forth by the Gods, the skies don’t bring forth thunder showers to quench your thirst and music does not herald the victory of mind over matter.

If the mind has to prevail over matter when it matters, it has to first learn to do so when it does not matter.

As a recreational runner, winning for me, on Comrades day, means simply finishing the race.  I have now come to believe that my battle to finish Comrades is also won or lost far away from witnesses- behind the lines, in the gym, and out there on the road, long before I stagger on uncertain wobbly legs into the stadium under those brilliant lights!

*(All my conclusions in this blog might be applicable only to a subset of one. i.e: To Me.  I am not a coach and would not advice anyone else to follow anything I say.  Celi’s advice to me, “Kill Yourself”, was given with a certain explanation and expectation which was applicable only to me.  The word’s “Kill Yourself” in reference to the Comrades Ultra may be quite misunderstood and misconstrued. There is no intention on Celi’s or my part to get injured or damaged or killed while following our passion for running.  It is only a phrase meant for me to remember and motivate myself to push to the limits which I am capable of.  The phrase might as well have been: “Amit, my boy, Please Be very careful NOT to get injured but try and push yourself as hard as you can” in which case, it might have not worked for me.

A long mantra might have not done its magic.  I needed a Rocky-esque dialogue.
And so Celi gave me my very own kick-ass mantra: "Kill Yourself" and it worked and in the final analysis, that is what Matters !
Posted by Dare To Run at 12:16 19 comments: